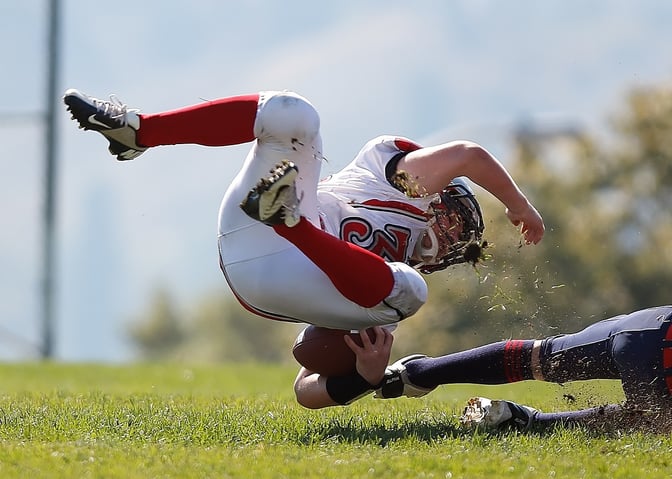 College football has made its mark on American culture. From watching games in the fall to going to your first tailgating party as a college student, Americans truly value their football. However, for student athletes, it comes at a much higher price than necessary due to injuries acquired on the field.

These injuries, ranging from twisted ankles and broken bones to brain-damaging concussions, can require weeks, months, or years of medical treatment. For some, they can even inflict permanent damage. While college football can generate a high profit for colleges, safety efforts need to be put to a higher standard. As many would argue, football is not worth the price of student athlete health.

In recent years, concussions caused on football fields have been generating a lot of attention. News stories, movies, and advocates have been fighting for player safety, but not a lot of change has happened. Why? The answer is money.

How Much Do Colleges Make?

Colleges make millions of dollars from their football programs. For smaller schools especially, this can help with essential funding for the school. Fame and notoriety can also influence potential incoming students to choose a university based on the football team, making them even more valuable.

The Children’s Hospital of Orange County (CHOC) wrote a report about football and the risk of concussion. They cite a study that stated that football concussion rates in kids under 19 have doubles in the past decade.

They also found that athletes don’t even need to be hit with an intense force, but that all the little hits to the head can add up and result in brain damage. The report mentions chronic traumatic encephalopathy (CTE), which is a progressive, degenerative disease of the brain that can be caused by repeated blows to the head.

CHOC additionally mentioned that with such a high number of young people getting concussions and CTE, there is a growing concern that children should not play football at all since head injuries can have even worse consequences for young brains still in development.

Of course, football injuries statistics and the dangers of head trauma, concussions, and CTE doesn’t stop many from playing or watching football. Junior high and high schools all over the country have football teams, and many players dream of going on to play at the university and professional level.

With tens of thousands of viewers per game and millions of dollars in profit, it’s no wonder that no one seems to care much about safety. In fact, the report mentioned that many sports medicine physicians don’t stand up for student well-being, but rather cite inconclusive evidence to avoid stating that football can be harmful for an athlete’s brain.

No athlete can enter their sport without the risk of injury. For athletes, the joy of playing outweighs the health risks associated. Football is much too popular a sport for people to simply stop playing to prevent injuries. However, efforts should — and are — being focused on preventing head injuries in football.

The Q Collar is one example of football safety gear designed to reduce concussions. The Q Collar is a flexible neck band that is used to reduce head trauma on impact by restricting blood flow from the brain after impact. According to Adelphi University, “the collar gently compresses the neck, applying slight pressure to the jugular veins and the neck muscles. The design creates a sort of “bubble wrap” for the brain by increasing blood volume in the skull.”

Another football safety tech innovation is the Zero1 Helmet, which provides better protection to the head on impact. While other helmets protect mostly from linear impacts, this one is designed to take on angular and rotational acceleration by dispersing the force from impact omnidirectionally.

Likewise, the Army has developed a helmet attachment to prevent the head snapping forward too far upon getting hit. This device attaches from the lower bar of the helmet to the chest, making sure that an athlete’s head won’t bend unnaturally forward.

Such advancements in football safety gear are crucial. In order to ensure the safety of football players, regardless of age, everything must be done to prevent concussions.

Another way to protect athletes on the field is by making sure the rules on the field are as safe as possible. While there will always be risks in playing any sports, it is also important to put player safety first and not put them in unnecessary danger.

For example, it was discovered that football players who did not wear their helmets during practice were less likely to receive injuries to the head in that time period. The report also says that the way football players typically tackle is dangerous, and by changing tackling form — for instance to the form rugby players use — can increase their safety.

While safety in football still has a long way to go, some changes have taken place to prevent concussions. According to sports experts, “in March of 2016, the NFL announced that if a player elects to receive a touchback, the ball would be spotted at the 25-yard line instead of the previous 20-yard line. This new rule change went into effect during the 2016 NFL season.”

Changes like these are vital, and more football moves and form should be re-evaluated. It is clear that, as a sport, football is not going anywhere, and most Americans would never want to give it up. However, some fine tuning could go a long way to improve the lives of cherished football players on and off the field. Efforts should be made until the safety of football players can be better guaranteed.

Roughing the Passer: What You Need to Know