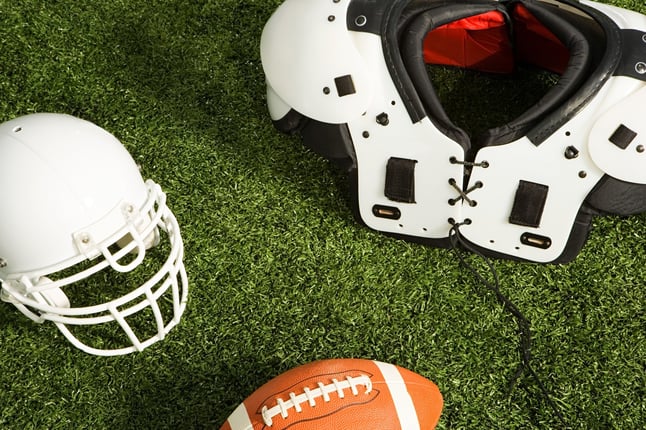 For those who don't know, our company is based in the University of Michigan hometown of Ann Arbor, MI.  So you better believe we were glued to the TV last Saturday watching the Ohio State vs. UofM game. But for the first time that I've seen in football, wide receiver, Corey Smith, received a time out for hooking his mouthguard on his ear.

Aside from the obvious excitement of OSU receiving a timeout, I was excited to see an official actually enforcing the mouthguard mandate. OSU coach, Urban Meyer, might be having a talk with his players about the importance of wearing mouthguards, for the sake of the scoreboard at the very least.

It's such an exciting occurrence because, unfortunately, it's a rare one. Even in basketball, you see players like Stephen Curry or Blake Griffin who wear their mouthguard on their ear or have it hanging out of their mouth (clearly not protecting their teeth). They'll never see a violation from the officials....unless they throw their mouthguard at the fans.

It's no secret that football is a dangerous sport. One of the key fundamentals of the game is tackling, which is known for causing potential chronic traumatic encephalopathy (CTE) and immediate dental injuries.  And still, you don't see any emphasis on personal protection equipment (PPE), from coaches or officials.

That's not to say there aren't coaches out there who take players safety seriously and encourage their players to speak up when they think they have an injury.  However, there is an alarming number of coaches who still:

A 2012 study of two college teams found instances in which coaches downplayed symptoms in order to get an athlete back into the game, ignored the physicians diagnosis and recommendation that a player sit out, resisted treatment of suspected concussion, and even intimidated physician observers.

The problem, as the author of the study, points out, is that the "young athlete is often caught between competing demands of the adults around them" and "sometimes make decisions based on the adult whom they perceive to have the most influence on their success, and also whom they wish most to please for a variety of reasons."

In this same study, a physician observer witnessed a player specifically ask the trainer not to disclose her current symptoms to the doctor so that she could continue playing and "the trainer obliged".

Without the support/enforcement from athletic trainers, coaches or governing body, is there even a point to safety regulations? The pressure of winning the game seems to blind those who are in charge of protecting athletes.

So, my title question still stands: Who actually cares about safety?

Creating a culture in sports that actually focuses on safety is nothing short of a paradigm shift. The entire mentality of players, their trusted advisors and their influencers would have to change. And what will happen to the game if it does? To quote the movie Concussion, the insistent pressure to play safe is "Pussi-fying" the great game of American Football. Should you be the change that moves the world? It's up to you.

As a coach, official, parent, supporter you are in the position to influence athletes' lives and you create the new safety standard. What will it be?

Basketball Basics: What Do You Need For An Upcoming Season?

How To Clean Your Mouth Guard