In 2013, 153,356 concussions were diagnosed in just one year of high school football. Although there is padding and helmets to cushion the impact from tackles, we should start looking at alternative ways to make the game safer to play. Here is an in-depth look at applying safer rugby tackles in football.

$1 billion. That's how much the NFL could be paying out to resolve concussion lawsuits for over 5,000 players. It's been a hot topic in sports this year and a sore subject for the NFL. While other injuries do occur, tackling makes up for over 50% of all football injuries.

Now, let's take a look at rugby, a game from which football was birthed.  Both sports are very similar in objectives and contact, but they also differ in certain rules.  I'm sure you've also noticed another key difference between the two: rugby players don't wear helmets or padding.

How can they safely play a game that has such high contact and aggression without the same protection as football? Ruby has mastered the art of safe tackling and football players could use a lesson. 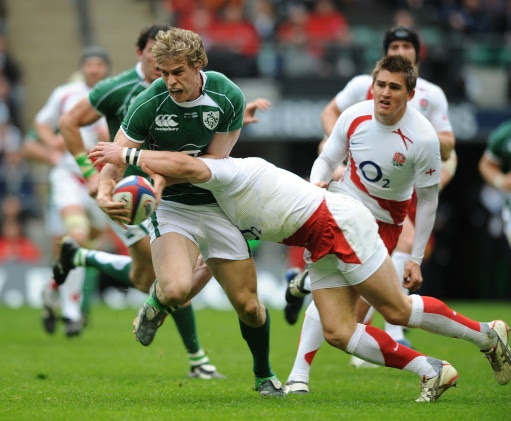 Football teams in the NFL and collegiate leagues are already starting to implement "shoulder leverage tackling" that comes from rugby. Pete Carroll, coach of the Seattle Seakhawks, has taken the lead role as an advocate for this method of tackling.

"Rugby players take the head out of the game," Carroll said, "We practice this without helmets, without pads."

Playing without helmets from the beginning teaches rugby players how to keep their head out of the game, instead of using it as a tackling weapon.

There's a lot tackling skills that can be transferred from rugby that can help prevent injuries. If you follow these general tips when you're on the football field (or rugby pitch) you could be saving yourself from future injury.

You can see in the examples from Carroll videos that this style of tackling is not only safer, but more effective. Ball carriers will go down a lot easier and faster with this method, while also reducing the risk of concussion.

Other teams, including Ohio State University and University of Washington, are some of the pioneering teams to implement Carroll's "Hawk Tackles".

Football injuries are known to be the highest across all sports. All it takes is getting coaches and governing bodies on board. These are simple tactics that can prolong the careers of athletes and possibly take football off of the danger list.

Is your mouthguard making you sick?