My Fight Spotlight: Growing The Game In Texas

The greater Austin area has nearly 100 youth and middle school teams, but none of them have made their reach to East Austin. With the hopes of bringing lacrosse to economically disadvantaged youth in East Austin, Texas, David Hamill, formed the New Horizons Lacrosse. But the impact he made on the Martin Middle School community became so much more monumental than just a step into growing the sport.

David was on his way out of the hectic world of sports parenting. His kids had moved on to college and he was about to retire. But lacrosse pulled him back in...

What was it that pulled David back into lacrosse?

"Lacrosse is a community," said David, "and a part of our community is being left out by not having the opportunity to play."

Starting in 2009, David's initial intent was to raise money to start a high school lacrosse team in far East Austin. David explained that if lacrosse was to ever go from a club sport to a sanctioned sport in Texas, it would need to have broader participation around the state. And in Austin the lacrosse participation is concentrated to more affluent parts of town.

David and his founding partner, Al Picazo, saw this as an opportunity.

"We felt like we could garner grants and financial support to give kids in East Austin a taste and a chance to see if they like to play lacrosse and we're finding that they do," David said.

The road was full of challenges. His first team, started in a local school was a "horrible experience". At the beginning of the season 22 students were signed up, but by the end of the season not a single player was academically eligible.

At that point, David and his partner took a step back to reevaluate New Horizons program and figure out a way that they could bring lacrosse to kids who would otherwise never pick up a stick or even hear about lacrosse. It was difficult to form regional teams as transportation and field availability are a significant issue in disadvantaged neighborhoods.

With the assistance and encouragement of US Lacrosse, David's program took a new direction started making lacrosse introductions in various PE programs.

Out of all of the after school program that New Horizons had visited and served, they saw the most interest from the students at Martin Middle School. A school that is made up of 95% of student who come from economically disadvantaged families, 20% special needs students, 32% ESL students. Where others may have seen this as a huge problem, David saw potential. 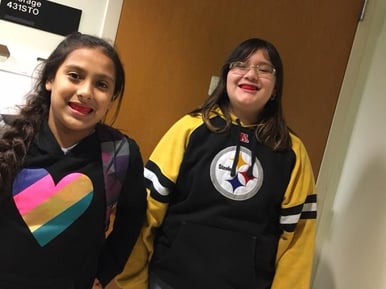 This year, New Horizon's introduced lacrosse to over 150 incoming 6th graders through the PE program. Out of those 150 kids, 60 continued to participate in the after school program and registered through US Lacrosse.

"We wanted to give the kids some kind of exposure to regulation lacrosse," said David, "And by introducing the program through a PE partnership, we were able to create enough interest in students to join the after school team."

New Horizon's has made a tremendous impact on the students at Martin Middle school, not only in terms of growing the sport but in overall attitudes of the students, concerning education and discipline. Parents and teachers have noted increased interest in academics in lacrosse players and reported that students actually look forward to coming to school because of lacrosse.

David isn't stopping there. He hopes to expand his program to other schools in East Austin. The biggest obstacle in his way are resources and dedicated volunteers (organizers and coaches). In short, he needs to clone himself (we are happy to report that the wish-fairies have accepted our request for a cloning machine). But in the meanwhile, you can contribute to this amazing program right here.

Growing the game of Lacrosse through diversity and inclusion