Is Rugby Really Safer Than Football? 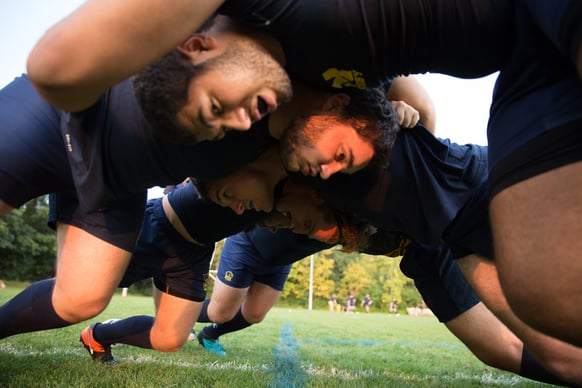 Despite their shared origins, people rarely care about football and rugby simultaneously.  Yeah, both sports involve tackling for possession of an oblong ball, occasionally kicking it through some posts, and even the fields look similar.  Indeed, it’s less the minute differences that pull supporters from one sport to the other, but often their point of exposure.  American football is huge in the USA, while rugby is still seen as mostly a strange deviant from across the pond, but with raised awareness about the dangers of concussions, there has been a steady drop in football participation.

Players are looking for alternatives. Rugby might seem like a bad place to look, but plenty of people consider it a safer sport. Let's take a look at rugby vs American football injuries.

The rising concussion crisis in the NFL has received plenty of media coverage, as has the impact football has on even high school athletes.  Professional players can generate 1,600 pounds of force in a tackle, much more than needed to cause a concussion. Football players achieve that sort of force through mostly athleticism, of course, but some of it comes down to their tackling approaches.  They are able to throw their entire body into the tackle, since they feel more secure because of their padding.

Additionally, in football, every yard is crucial.  That means that in football tackling, it’s imperative to stop the offense immediately, so they aim higher in their tackling in order to halt  all forward momentum.  It’s exactly this sort of sudden stopping that causes concussions.

Rugby tackling, however, has evolved to protect padless and helmetless players.  Several football teams have trained on how to rugby tackle, which focuses on low, shoulder-lead impact.  However, rugby tackles are controlled; players are never throwing their entire body into the tackle, so they’ll never achieve that same level of force as takedowns during football games.

In rugby, you can only pass the ball backwards or parallel, never forward.  This means that rugby players are running up to the ball and seeing defenders coming at them.  They can prepare for contact, and rugby players are often taught how to fall correctly.  Hitting the ground in the right position is not only important for players’ health, but to give their team the best ball placement as well.

Football, however, is a different story.  Forward passes are encouraged, so this results in players looking behind them for the ball seconds before being mowed down.  They can also be tackled while still in the air, which would be illegal in rugby.  Although football players have more padding to protect the rest of their body from the tackle, they have no time to evaluate how they will take the blow.

Rugby Is Far From Perfect

Don’t run over to your local rugby little league just yet.  While rugby does have many safety advantages over football, it also has its own problems.  One of the major features of rugby is the scrum, a mass of opposing bodies that half of the players from each team participate in.  It involves locking your shoulders with your teammates and pushing against your opponents.  While the scum is highly regulated, that doesn’t completely prevent injuries.  If football’s problem is concussions, rugby’s is spinal injuries, frequently as a result of improper scrum.

Every contact sport is going to have significant risk.  Making the decision between football and rugby specifically will be obvious for some, and more of a toss up for others.  Ultimately, rugby has a better record of teaching players good habits to minimize their risk, but it is also not nearly as available or popular as football is in the United States. Colleges generate multimillion dollar profits from their football programs; the NFL’s annual revenue could pay for 10 Pluto missions.  Despite safety concerns, football is not going anywhere.  You likely will have more opportunity to play football or find leagues that you would with rugby.

Whichever sport you choose for yourself or for your child, make sure you have the proper safety equipment.  Both sports mandate a mouthguard, that is non-negotiable.  Rugby’s only other safety equipment is a scrum cap, a thin cap worn by certain members of the scrum to prevent cauliflower ear.  Football players’ padding is much more extensive, but it is absolutely necessary if they intend to play the sport to its full potential.

Although  both sports necessitate some safety equipment, that’s not enough of a reason to throw them out entirely.  You need to be made aware of the risks, prepare for them yourself, then make your own decision.

Breast Cancer Can Happen to ANYONE. Reduce your risk and join the fight!