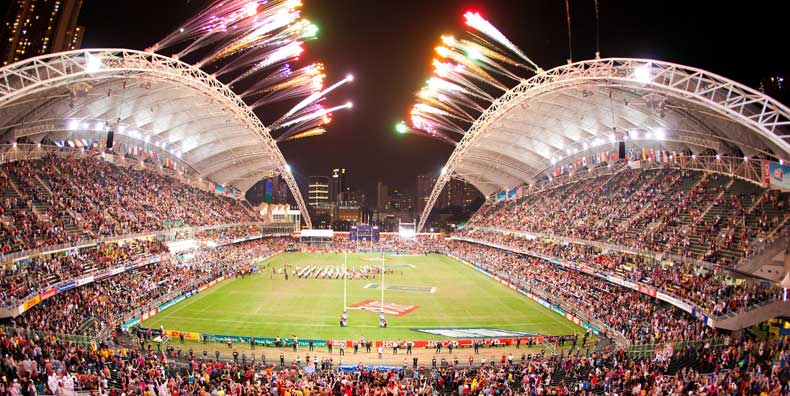 In the past 30 years, rugby has received increased support from all over the states.  In 2009, the International Olympic Committee (IOC) announced that rugby sevens would make a debut at the Olympics in 2016. Following the announcement, NBC and Universal Sports Network started broadcasting several rugby tournaments, further bringing rugby into the American spotlight.

After crashing onto college campuses nationwide in 1874, rugby made four appearances in the Olympic games. The US dominated the short Olympic run of rugby, being the only country to win two gold medals. Unfortunately, in 1924 rugby was taken out of the Olympic games due to the controversial aftermath of the United States versus France match.

The popularity and growth that rugby had enjoyed in the States before its removal from the Games by the IOC soon faded.  In other parts of the world however, the game continued to stride into center stage.

The Rugby Union now has over 450,000 players and 2,500 clubs in the United States alone. Compared to the UK and other British colonized countries however, Rugby is still working its way to the big time.

Rugby began its comeback in the US in 1975, when the Rugby Football Union of the United States was formed. Many historic milestones were reached shortly after the governing body of Rugby was established in the United States.  The USA Rugby team joined the International Rugby board, the womens team toured Europe and was featured in the New York Times, and the States even participated in the first Rugby World Cup in 1987.

Rugby is a huge source of entertainment for players and non-players. Being at the Olympics will put rugby into the international spotlight that it’s never seen before. With the Olympic qualification process well underway this summer, popularity and excitement in the rugby community will continue to grow and inspire potential players.

Unlike rugby’s previous appearances at the olympics, the competition will be fierce and the game will be harder. Instead of the commonly played 15-on-15 game (rugby union), there will be shorter 7-on-7 matches (Sevens).

“The intensity of rugby union would make it impossible to hold a tournament over the course of the Olympics, which is only 2 weeks,” say’s Brighton High School Rugby Coach, Mike Perkaj. "15's is too intense and the recovery would be too short.  Players need a minimum of 4-5 days of rest between Rugby Union games."

There’s still four more rounds left in the World Rugby Sevens Series, and the top four teams to be automatically qualified to go to Rio will be determined. As for now, South Africa is in the lead with 93 points, closely followed by New Zealand (88), Fiji (86), and Australia (71).

Shaena Sparrow, captain of the Women’s Detroit Rugby Football Club (DRFC), is remaining hopeful that USA will qualify for this important milestone in Rugby history. “They’re getting better as we speak,” she says. Currently, USA is in 7th place with 51 points.