6 Dads You've Seen on the Sidelines 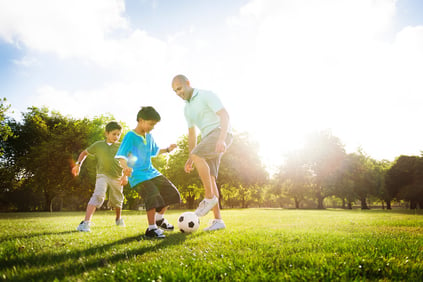 Have you seen them? Are you one of them? In the world of youth sports, dad's can be busy, loud, slightly obsessive with a hint of obnoxious. They are also supportive, encouraging, loving and knowledgeable.  What kind of dad are you? Read our father's day dedication to our slightly profiled crazy sports dads.

A.K.A Team Historian. This is the Dad that always has a trip-pod set up at the sidelines ready to put his new hobby to the test. He captures professional quality pictures of every special moment of the team. By the end of each game night, hundreds of photos are uploaded to an album on Facebook (and eventually brought to the banquet). And despite 500 still-action shots of his son pitching, everyone loves free photos that make their child feel like a pro-athlete!

There's a 50% chance that this dad played sports in high school. There's also a 50% chance he's already on an adult league. Young-Agains love to relive their sports glory days vicariously through their kids by getting TOO involved. It wouldn't be an intense nail biter without his excited outbreaks, as long as everyone remembers to...HAVE FUN!

The "Stop, Drop and Roll"

Life can get super crazy as a sports parent, especially if you have multiple kids and multiple "bus stops". Sometimes you just gotta stop the car, drop off the kids and roll on to the next stop. Going to the games when they can and being supportive is what counts. This crazy sports parent would benefit a lot from a cloning device. *Hint* Father's Day present!

Despite the library of knowledge, this dad often forgets that his kid is on the local rec league and not the NBA. But his eerie propensity for fact memorization comes in handy. This dad is a walking clipboard of not only his child's statistics, but all of their teammates' too.  These dads shine the brightest during those 4-year-olds soccer matches, where everyone else had long lost track of the score.

Dad's are great at showing support and teaching kids the ways of their new sport.  But if it turns into a scene out of "Kicking and Screaming" things have gone too far!

An unyielding source of non-stop advise, this dad is a great motivator, cheerleader and supporter. His heart is in the right place, even if his sidelines advise at times confuses the seasoned pros, let alone the pee-wee players. Despite his unruly manner, this father is the team's favorite, because he'll dish it out to the opposing side, get in the ref's face, and yell for a time out when the untied shoelaces yet again threaten the outcome of another intense game.

This was my dad to the T. I loved playing goalie during my short lived youth soccer career, mostly because I thought it involved less work. Even though I was waiting around picking dandelions as goals were flying passed me, my dad was still in the stands screaming me on.  Megaphone? Don't bother. These crazy sports dads don't need it. Their kids can hear them from across the field and the other parents learn to bring earplugs to the games.

Chauffeuring cars of chatty teenagers, giving sideline advice, pre/post game pep talks, taking pictures......Dad's have many ways of showing support, especially when it comes to sports. But it's no secret that they have their crazy or excited moments. It's impossible to fit a world full of awesomely-crazy sports dads into one uniform list. Every dad is special and unique and we are always grateful for their enthusiasm and support.